Week 7 of the 2017 NFL season gave us another round of surprises and thrills on the field and in fantasy football. From the Oakland Raiders getting a must-needed win over the Kansas City Chiefs on Thursday Night Football, to the Philadelphia Eagles taking a commanding a lead in the NFC East, and the Chicago Bears winning their second game in a row, it was an eclectic mix of football.

If you had the likes of Raiders wide receiver Amari Cooper or Dallas Cowboys running back Ezekiel Elliott on your team, you were most likely celebrating a win in your league.

Elliott had an outstanding game against the San Francisco 49ers, rushing for 147 yards on 26 carries and two touchdowns. He also had a 72-yard reception for a touchdown, giving him 39.9 fantasy points.

Cooper did just as well in fantasy. Against a tough Chiefs defense, the struggling Cooper erupted for 11 receptions (19 targets) for 210 yards and two touchdowns. In fantasy, he scored 33.0 points, the highest total of his young career. 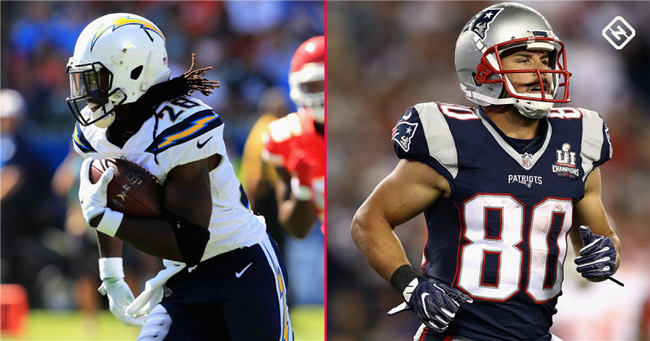 But apart from those two guys, other players also lit up the fantasy scoreboards. Who were those players? Here are three who stood out in Week 7:

After a shoulder injury knocked him out of the game against the Arizona Cardinals in Week 6, Winston came back with a vengeance on Sunday.

The third-year starter out of Florida State started off slow in the first half against the Buffalo Bills with a turnover, but heated up in the second half, hitting rookie tight end O.J. Howard for two touchdowns and finding wide out Mike Evans for a touchdown.

Winston completed 72.7 percent of his passes for 384 yards, three touchdowns and an interception. Even though the Buccaneers ended up losing 30-27 in overtime, Winston was a fantasy football gem.

He racked up 23.3 points, his second highest total this season. For Tampa Bay and fantasy football owners to make a run at a playoff spot, they need “good” Jameis Winston to show up more consistently.

A few weeks ago, I mentioned that Minnesota Vikings running back Latavius Murray would be a good waiver wire pickup with rookie Dalvin Cook tearing his ACL, ending his season.

However, things did not start off great for the former Oakland Raider as he struggled in his first start against the Chicago Bears on Monday Night Football. Murray had a pedestrian 31 rushing yards on 12 carries and two receptions for 12 yards.

Meanwhile, his teammate Jerrick McKinnon outperformed him with 95 rushing yards on 16 carries and a touchdown. McKinnon was also effective in the receiving game with six receptions for 51 yards.

With that being known, many fantasy football owners, including myself, turned their backs on Murray over the last two weeks. But Murray sure did make a fool out of me on Sunday as he had a breakout game with 113 rushing yards on 18 carries and a touchdown.

The 6-foot-3, 225-pound running back scored 17.3 fantasy points, which helped a lot of owners who had an opening at their RB2 spot or did not have the services of Leonard Fournette due to injury.

On Sunday, the Vikings head across the pond to play the Cleveland Browns, whose defense is only giving up 83.7 rushing yards per game. Therefore, Murray will be another last-minute start for many fantasy owners.

This season, everybody has been enamored with the Philadelphia Eagles and Jacksonville Jaguars’ defenses and for good reason. Both defenses significantly improved, and their defensive lines are creating havoc.

On Sunday, the Indianapolis Colts’ offensive line felt that havoc from the Jaguars’ defense as they sacked quarterback Jacoby Brissett an unfathomable 10 times. In that game alone, second-year defensive end Yannick Ngakoue pitched in with 2.5 sacks, while veteran Calais Campbell added two sacks to his league-leading total of 10.

Overall, the Jaguars have compiled 33 sacks through seven games, first in the NFL. It is the main reason why owners start them every week, as they have put up 20 fantasy points or more in three games this season.