Trump’s NFL attacks down to jealousy

Trump has been vocal in his criticism of NFL players who have chosen to kneel during the national anthem to highlight racial injustice in the United States. In September the president said: “Wouldn’t you love to see one of these NFL owners when somebody disrespects our flag to say ‘Get that son of a bitch off the field right now. Out! He’s fired. He’s fired!’”

The NFL commissioner Roger Goodell said this week that players should stand for the anthem but would not be forced to. That led to Trump tweeting that the league has shown “total disrespect” for America. But Khan suggested that rather than patriotism Trump’s anger may stem from his failure to buy the Buffalo Bills in 2014.

“He’s been elected president where maybe a great goal he had in life to own an NFL team is not very likely,” Khan told USA Today Sports on Wednesday. He added: “The attacks on Muslims the attacks on minorities the attacks on Jews. I think the NFL doesn’t even come close to that on the level of being offensive. Here it’s about money or messing with – trying to soil a league or a brand that he’s jealous of.”
ESPN kneels before advertisers by silencing Jemele Hill for doing her job

Trump was also the owner of the New Jersey Generals in the United States Football League a rival competition to the NFL. Trump led an attempt with fellow USFL owners to force a merger with the NFL in 1984 but he was unsuccessful and the league folded in 1986. 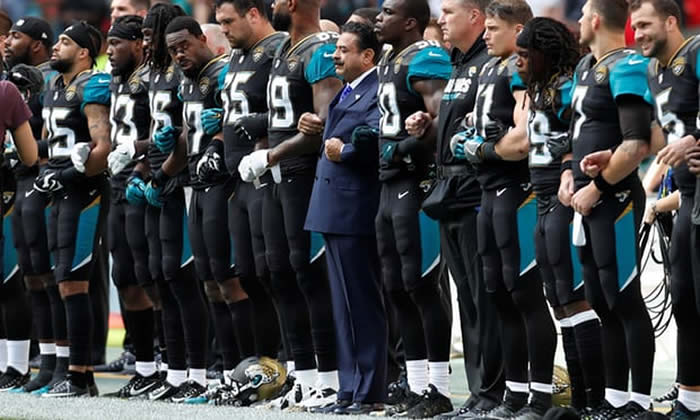 Khan is originally from Pakistan and also attacked Trump’s immigration policy which he said is far more sinister than the president’s scuffle with the NFL.

“That’s one aspect that you can imagine – someone is getting a visa that will change their life is from a Muslim-majority country – and now boom that dream to change lives they get locked out,” Khan said. “That’s a hell of a lot more significant than fighting some sponsors or people who want their money back because they’ve been riled up.”

Khan’s voice is slightly undermined by the fact that he gave $1m to Trump’s inauguration fund although he told USA Today he had no regrets about his donation and had been attracted by the president’s economic policies.